“Mobile Reporting is the Future!“ 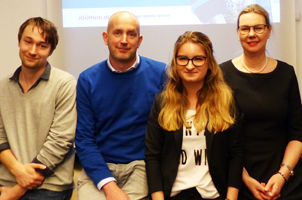 Report of the Event by Phil Göbel

Hamburg. Journalism from the pocket? This was the motto of the second “Medienschnack”, a panel discussion organised by the Hans-Bredow-Institut in co-operation with Universität Hamburg. The topic ‘mobile reporting’, i.e. filming with the smartphone, becomes more and more important for TV producers. But is this the way to good journalism? Jessica Szczakiel, the host of the event, elicited reports from the panel guests about their everyday life and a look into the future.

“I am sure that mobile reporting is the future. Storytelling offers completely new ways for journalism,” says Björn Staschen, mobile reporter of the NDR. Especially since the riots at the G20 demonstrations in Hamburg, many journalists realised how many new possibilities offered by the smartphone.

Staschen has been working for a year and a half for the “Next News Lab” of the NDR, which focuses on mobile reporting. He emphasises that the low-threshold encounter with the smartphone for eyewitnesses and people who have respect for large camera teams opens up completely new ways to produce content. “We have been very successful with the smartphone,” Staschen continues.

Christiane Brandes-Visbeck agreed with Björn Staschen. The CEO of ‘Ahoi Consulting’ is an expert for digital communication. She sees the development of mobile reporting especially as a step back to the roots of her work. “Due to the smartphone, I am able to work as I used to back in the days. I can go out and generate content. You couldn’t do something like this in the last few years for cost reasons.”

However, can the smartphone keep up with the quality of a professional TV camera? Michael Fetter-Nathansky, film director and student at the Film University Babelsberg, is sceptical about it. “I can imagine that you make a whole movie with your mobile phone but pans and others technical movements are only possible with a real camera. The art of film is also aesthetics and cinematic language; you have to think carefully about what you are filming.”

Staschen has a similar view on this. Since even children learn how to use a smartphone, the group of people who can use a camera is of course bigger. Therefore, the journalistic ability is crucial, because “in the end it is about the story – no matter if you film it with your smartphone or a TV camera.”

Is mobile reporting just a gold rush that is going as fast as it came? “Definitely not,” says Brandes-Visbeck, “At some point, journalists started to do journalism at their desk because nothing was paid. The smartphone enables us to provide a much greater transparency. That’s what we have to continue with.“

Fetter-Nathansky is a little more careful, “The problem is that the inflationary use of smartphones takes the focus during the shooting. You no longer think twice about what you are filming but just keep on filming. I get the best results when I am fully focused. You cannot do this in such a way with a smartphone.”

The film maker does not have to give up the “real” TV camera in the future, reassures Staschen. “With all the advantages that come with a smartphone, the TV camera won’t disappear altogether.”