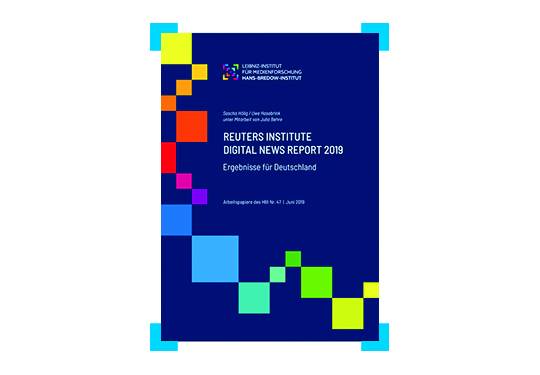 Hamburg, 12.06.2019: More than one third of adult Internet users (34%) rely on social media such as Facebook, WhatsApp or YouTube as their source for news. In the group of 18 to 24 year olds, Instagram has taken the lead. However, only ten percent of all Internet users consider social media to be the most important source, and only three percent regard them as the only source. Only 16 percent trust news from social media. These are the findings of the Reuters Institute Digital News Report, for which the Leibniz Institute for Media Research in Hamburg prepared the German part of the study. The 2019 study is based on 75,749 respondents from 38 countries.

Instagram is the most commonly used social medium in the age group of 18- to 24-year-old online users, also in connection with news. Nearly one in four Internet users (23%) at this age regularly consumes news content online, positioning Instagram just ahead of Facebook and YouTube.

Nevertheless, social media are not primarily used in connection with information about news relevant world events. Twenty-two percent of German online users state that they come across news content on Facebook. Almost every fifth Internet user aged 18 and older also consumes news on YouTube (19%). 16 percent are exposed to information about world affairs via WhatsApp. In the long-term view it becomes clear that Facebook is still the social medium through which users are most likely to come into contact with news content, but that the shares have tended to decline in recent years. Positive trends can be observed on YouTube, WhatsApp and Instagram. Across all age groups, Instagram (6 %) overtook Twitter (5 %) as the source of news in 2019.

With 95 percent, the vast majority of adult onliners in Germany will continue to watch, listen to or read news at least several times a week in 2019. This value is stable in the long-term perspective. The proportion of adult Internet users in Germany who are extremely or very interested in news is slightly declining to 68 percent.

Mix of Traditional and New Media

All in all, Germans continue to rely on a mix of traditional and new media to inform themselves about world events. Three out of four adult onliners watch news on television several times a week (72%), and 44% listen to news on the radio. Online news is viewed at least once a week by 68 percent of Internet users over the age of 18. In the long-term trend, the proportion of people watching news on television is slightly declining, while more and more people are using the Internet as a source.

Printed newspapers and magazines will reach 34 percent of adult online users in 2019. The online editions of newspapers (26 %) and magazines (28 %) also remained at the level of previous years.

In Germany, television is not only the most widespread source of news, it is also the most important source (45%) for the majority of online users. More than one in three of the respondents cites the Internet as their main source of news (36%); among 18-24 year olds it is 69%. However, even for the youngest group of respondents, traditional journalistic-editorial services concerning news consumption online are in the foreground.

Confidence in the Media Further Divided

Only nearly every second adult online user in Germany trusts most of the news (47%). This is three percent points less than last year, with slight declines of similar magnitudes being observed in all age and formal education groups. A long-term view clearly shows that general confidence in news has not yet recovered since a significant loss in 2016.

The picture is somewhat different with regard to trust in the news you use yourself: 60 percent of online users over the age of 18 agree with the statement that they trust the news they use. This value has been comparatively stable over the last three years.

In an international comparison of the 38 countries participating in the survey, Germany ranks twelfth with 47 percent of respondents who generally trust news. The range extends from 59 percent (Finland) to 22 percent (South Korea).

The news spread via social media is viewed most skeptically. Only 16 percent of the interviewed onliners state that they trust them. This is two percent less than in 2018.
The highest levels of confidence are in the main news programmes of the two public broadcasting channels and in regional daily newspapers.

The direct access to the website or app of a specific news service is the most widely used (37%) and also the most frequently used access route (33%) in all age groups. Accordingly, the news brand continues to be a decisive criterion for access to news for young and older users. Younger onliners also become aware of news on a topic via social media and search engine results.

Smartphone to Get News More and More Important

In 2019, the smartphone will be the device used by most adult onliners to use the Internet (80%). The smartphone has also taken the top position with 56 percent when it comes to accessing online messages, putting it ahead of the laptop or PC.

The majority of news users do not actively participate in news reporting on the Internet. Ten percent of adult onliners comment on articles on social media and six percent directly on news sites. These figures have been constant for years. Particularly active are users who associate themselves with the outer left or right spectrum and/or do not trust news coverage.

Information about the Study

Since 2012, the Reuters Institute Digital News Survey has conducted annual representative surveys in 38 countries to investigate general trends and national peculiarities of news consumption. What types of news are of interest; what devices and methods are used to find them; what providers are trusted; and what are people's views on funding journalism?
The 2019 study was carried out simultaneously in the following countries under the coordination of the Reuters Institute for the Study of Journalism based in Oxford (UK): Argentina, Australia, Austria, Belgium, Brazil (urban regions), Bulgaria (urban regions), Canada, Chile, Croatia, Czech Republic, Denmark, Finland, France, Germany, Great Britain, Greece, Hong Kong, Hungary, Ireland, Italy, Japan, Malaysia (urban regions), Mexico (urban regions), the Netherlands, Norway, Poland, Portugal, Romania, Singapore, Slovakia, South Africa (urban regions), South Korea, Spain, Sweden, Switzerland, Taiwan, Turkey (urban regions), and the United States. Around 2,000 people per country were interviewed in 2019. The 2019 study is based on a total of 75,749 respondents from 38 countries. The fieldwork was carried out between 17 January and 27 February 2019 by the survey institute YouGov.

The Leibniz Institute for Media Research | Hans-Bredow-Institut has been responsible for the German sub-study as a cooperation partner since 2013. The survey in 2019 has been supported by the Landesmedienanstalten [State Media Authorities] and by the ZDF [Second German Television].

The complete report with all international findings will be presented to the public in London on 12 June 2019.
Further information on the study can be found here: http://www.digitalnewsreport.org/ (English) and on the project page of the HBI (German).

Information on the Reuters Institute for the Study of Journalism

The institute was founded by the Thomson Reuters Foundation in 2006; it is based at the Department of Politics and International Relations at the University of Oxford. The institute is an international research centre in the comparative study of journalism. With its global perspective in its research, the Institute offers a forum for researchers from a wide range of disciplines and journalists from all over the world. More information at http://reutersinstitute.politics.ox.ac.uk/.

The research perspective of the Leibniz Institute for Media Research | Hans-Bredow-Institut focuses on media transformation and related structural changes of public communication. With its cross-medial, interdisciplinary and independent research, it combines basic research and transfer research, and thus, generates knowledge on issues relevant for politics, commerce and civil society. In 2019, the institute was accepted into the Leibniz Association. The Joint Science Conference of the Federal Government and the Länder (GWK) decided in favour of the institute on 13 April 2018. More at www.leibniz-hbi.de.